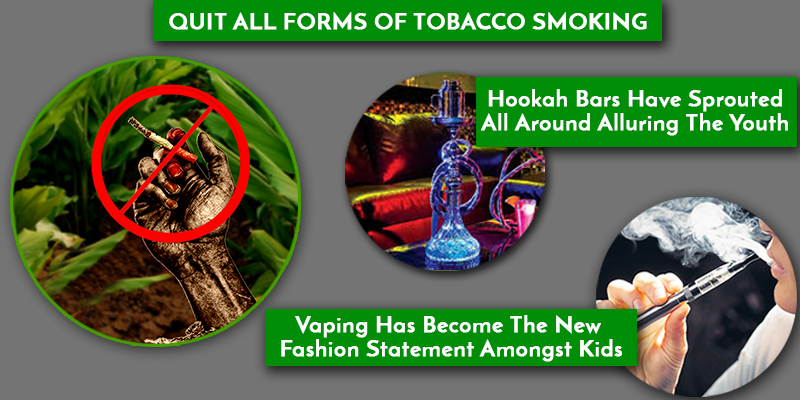 I live near a good engineering school in Delhi and it is not very rare for me to come across groups of young boys and girls in shady alleys sneaking a forbidden cigarette away from the disapproving eyes of adults. In fact, very often my sensitive nose picks up the smell of pot being smoked up too. Hookah bars have sprouted all around the neighbourhood, alluring the youth with their tantalizingly exotic offerings. Then there is a new era of e-cigarettes too that is slowly dawning upon India after having conquered the West.  Vaping has become the new fashion statement amongst kids in the metros today. These e-cigarette manufacturers have become so very innovative that they are coming up with fancy devices like the pen- drive-shaped JUUL.  Young students find such devices quite convenient especially since they can easily sneak them in classrooms and take puffs without anyone even noticing. Parents are unable to decipher what these devices are since they look just like any ordinary flash drive.

All these new-fangled smoking methods and devices are just as bad as the original cigarette since all of them contain the harmful and highly addictive nicotine. Nicotine is responsible for stimulating the production of the neurotransmitter dopamine that elevates the mood and brings about a carefree, happy feeling. However, this feeling is short-lived and in order to continue experiencing the same level of pleasure, a smoker feels the urge to smoke cigarettes one after the other. The body’s reaction to nicotine also starts to drop over a period of time which means that after some time the same amount of nicotine does not result in the same amount of pleasure and hence the body craves for more number of cigarettes. Smoking adversely affects many of our organs.

Amongst many typical methods of getting rid of nicotine addiction like nicotine patches, gum etc,  curcumin therapy has started to gain huge popularity amongst smokers especially since it is natural and without any side effects. Curcumin is a natural polyphenol found in turmeric, It has been blessed with a large cache of therapeutic properties that make it very beneficial in the treatment of a variety of diseases.

Some advantages of consuming curcumin regularly when trying to get rid of nicotine addiction are as follows:

Fukamin-a is a fantastic product launched by Bagdara Farms that can help smokers quit smoking as well as reduce the harmful effects of years of tobacco and nicotine exposure.  It is made using curcumin that is locally cultivated using organic methods of farming. This ensures that the curcumin produced is 100% pure and natural and does not contain any unwanted chemical residues. When consumed on a regular basis, Fukamin-a acts like a natural anti-smoking agent and helps even the most compulsive smokers Quit Smoking of all types. Try Fukamin-a today and get rid of this nasty habit forever!

2 thoughts on “Quit All Forms Of Tobacco Smoking With Curcumin”