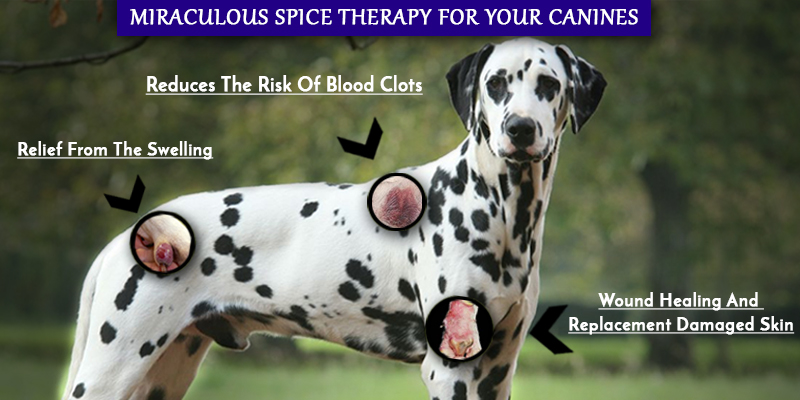 MIRACULOUS SPICE THERAPY FOR YOUR CANINES

A dog loves you more than he loves himself. Well, the underlying feelings in this quote can be understood by all the pet lovers. Dogs are our perfect buddies with just one fault, i.e. they have a very short lifespan. Time flies and before one gets to know it’s time to say good bye. On a positive note, would you believe me if I told that a commonly used spice in our kitchen cabinet can not only improve the quality of life of your pooches but also add on their life spans? Many scientific researches and studies have claimed that turmeric contains a magical compound called curcumin which is a powerhouse of many activities like anti-viral, anti- inflammatory and anti- cancer.

I am an avid dog lover and had a golden retriever as my best friend for good 12 years. Bozzo was diagnosed with last stage of spleen cancer. It came as a huge surprise for us as we had taken really good care of him through the years. Painful rounds of chemotherapy and blood transfusions began. Not all stories have a happy ending. Bozzo crossed over the rainbow bridge after three months of treatment, leaving a hollow space in our hearts.

Had I known about the benefits of curcumin and tumerone found in turmeric earlier, a few more years would have been added to Bozzo’s life. Apart from cancer, there are many other ailments like arthritis, tick fever, intestinal parasites, kidney failure, dilated cardiomyapathy and skin infections that can affect the quality of life of the dogs. Let me explain the benefits of curcumin in treating many such health concerns by stating the following points:

I have truly started to believe that curcumin and tumerone are indeed nothing less than a magical potion from dear Mother Nature.  One concern that I have always had in my mind is the purity of the veggies and herbs grown these days. I wouldn’t want anything less for my pet so my recommendation would be to use Barkumin, a turmeric based product made exclusively for our fur balls. A produce of Bagdara Farms, curcumin used in this product in free from any kind of chemical pesticides which makes it absolutely safe for the gentle bodies of dogs.

The surreal golden paste for dogs can be made in a jiffy using Barkumin. All one needs to do is boil ½ cup Barkumin, 70 ml of olive or coconut oil, 1 tsp ginger powder, 1 tsp cinnamon powder, 1tsp black pepper and 1 cup of water. It is suggested that to start off with small quantities and follow the recommended dosages as given below:

Give your pet a healthy life with Barkumin and shower him with love. That’s the least we can do for their unconditional love!