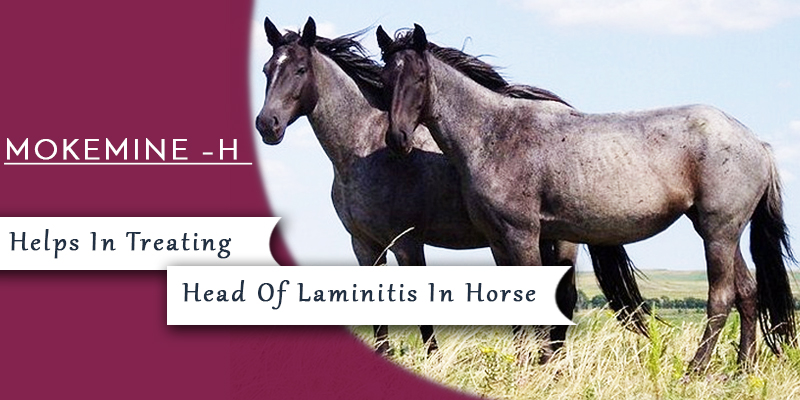 There are some painful and potentially crippling disease that can be fatal to horses. A horse may have to be humanely euthanized if the effects of the disease have become so serious that it is inhumane to continue to attempt further treatment. One of this kind is Laminitis in horses.

In laminitis, the blood flow to the laminae is affected, resulting in inflammation and swelling in the tissues within the hoof, and severe pain. As the laminae are starved of oxygen and nutrient rich blood, the cells become damaged.

The laminae are responsible for supporting the pedal bone in the hoof and thus the weight of the animal. Laminitis can affect any of the feet but is more commonly seen in the front feet. Any horse or pony can be affected by laminitis.

A number of different factors can cause laminitis or predispose a horse to getting the condition.

Stress A dramatic change in environment and/or frequent travelling, particularly for overweight animals, can trigger laminitis

Severe infection Toxaemia (‘blood poisoning’) can result from severe bacterial infection, such as retention of the placenta after foaling, a severe colic attack or prolonged diarrhoea.

Obesity Excess weight adds an increased strain on the horse’s vital organs as well as its limbs.

Symptoms of Laminitis in Horses

The horse will show an inability or reluctance to walk or move and may possibly lie down, displaying an unwillingness to get up. The horse will be visibly lame especially when moving on a circle or on a hard surface, and will have an increased digital pulse in the foot. There can also be symptoms shown vaguely similar to colic.

The horse’s hoof will have the appearance of growth rings around the hoof wall, which generally indicates that it has suffered from laminitis in the past. The heel will often grow faster than the toe and the white line in the hoof will have widened. The horse may well have a large crest, which runs along its neckline.

If a horse or pony displays these symptoms it is important to start treatment plans carefully. Correct treatment needs to be administered as soon as possible to prevent any lasting damage to the feet and provide pain relief. In some cases an X- ray may also be conducted.

One more line of treatment can be adopted to cure laminitis and that is the introduction of right herbal products which are free from any side effects and doesn’t prove further harmful.

One such herbal product is Mokemine-H which is prepared using the purest form of turmeric grown and flourished in Bagdara farms only .This finest turmeric is taken and its bi –product curcumin is used in the formation of Mokemine –H .Moreover , bagdara frams doesn’t use any kind of artificial fertilizers and pesticides while growing this purest turmeric which is further used to create many life saving products .

How Mokemine –H can help in Laminitis in Horses

Laminitis is a very painful and debilitating disease. Prevention is always better than cure. When it is not treated quickly or correctly it can cause permanent damage, which may result in euthanasia.

Mokemine –H can be used without any iota of doubt to treat Laminitis in horses because of the presence of organic and natural turmeric in it. It can be wonderfully used for horses suffering from stiff joints and itchy skin conditions, as well as offering support to the digestive system. The main active ingredient in Turmeric is curcumin, a compound found to have powerful anti-inflammatory effects. It is also a strong antioxidant that is useful for soothing stiffness and pain, maintaining good digestion and alleviating skin conditions.
It’s important to remember that any substance that can alter how the body functions, whether “natural” or not, must be viewed and used with the same respect and precautions as a drug in a bottle or jar. Anything can have harmful or unwanted effects when used in the wrong amounts, at the wrong time or in combination with the wrong things.