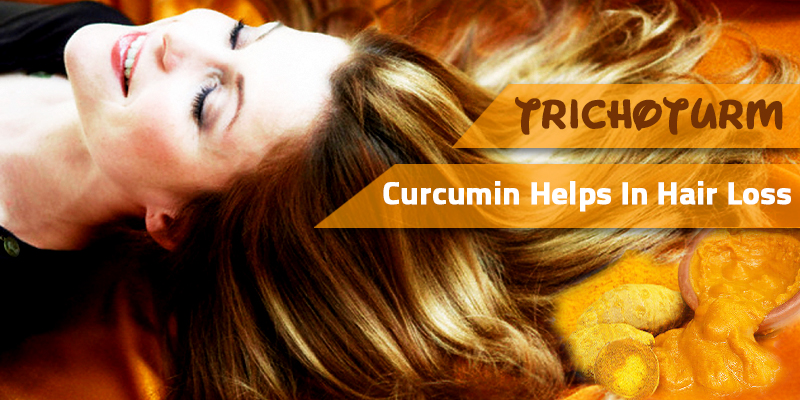 According to the research, turmeric and its compound curcumin are helpful in hair fall control in varied ways. These also help in reducing the stress that is involved during the hair loss which in turn is responsible for greater hair loss. Read the article to know curcumin-rich products helps in controlling Hair Loss. Trichoturm rich in Curcumin helps in to fight Hair Loss and to know more read in detail below:-

Also in this study, it was concluded that Curcumin ability to restrict 5α-reductase was though less than finasteride yet it is a safe bet.  Finasteride is a drug which is used to prevent hair loss further and also helps in regrowth of hair. One of the studies proved that one whole turmeric extract had the power to control the enzyme, as much as of 13 gm finasteride. Which is not bad at all?

Why is Curcumin better than Finasteride?

There are no side effects of Curcumin. It is believed that Finasteride usage had adverse effects on the body which included male infertility and erectile dysfunction. These side effects were reported by patients who took Propecia® and Proscar®. The side effects even continued after they stopped taking these drugs whose base chemical was Finasteride.

Health and Happiness Promised by Curcumin

It is also believed that the curcumin can also help in combating triggers of seborrheic dermatitis-like HIV and AIDS, Parkinson’s disease, and stress. Large exposure to the sun can also trigger seborrheic dermatitis and also cause hair loss on its own. The anti-oxidant properties in curcumin help to fight against the free radicals that are produced by UV radiation.

The hair growth cycles are controlled by Vitamin D receptors (VDRs) found in hair follicles. Vitamin D is not directly involved in the hair growth cycles, but VDR genes can be readily activated in the body by dietary supplements or compounds. In fact, it has proved in studies that humans that have poor functioning of VDRs suffer hair loss.

It has been proved in studies that curcumin activates VDR genes that promote hair growth.

Trichoturm from Bagdara Farms is made from pure Curcumin from 100% organically grown Turmeric. Thus, it is a storehouse of all the properties that curcumin in stores for reducing hair loss.  Buy now!

2 thoughts on “Fight Hair Loss with Curcumin, Find out how”