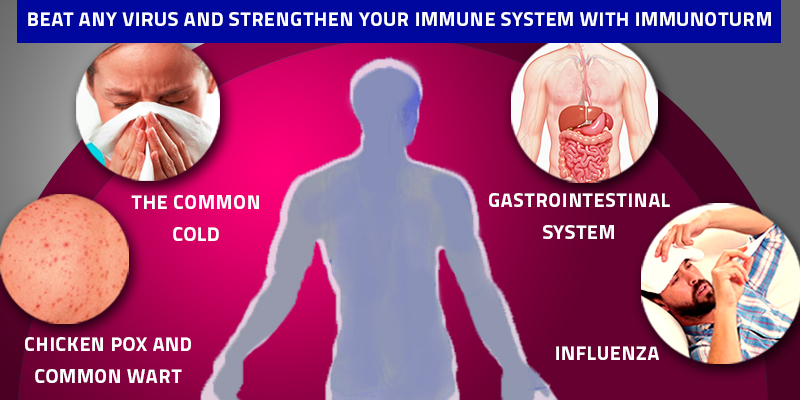 WITH CURCUMIN YOU CAN BEAT ANY VIRUS

Viral infections are synonymous with poor health and compromised immune system. How exactly do these viruses find their way into our system and what is their impact on our health. To understand that we first need to know the viruses and how they attack our systems?

What Is A Viral Infection?

Viruses are tiny organisms that cause infections in our body. They are made up of genetic materials like DNA and RNA which is used by the virus to replicate. For survival a virus must invade and attach itself to a living cell where it multiplies and produces more virus particles.

Once it attaches itself to a cell it alters that cell’s functions or kills it. Once that cell dies new types of viruses are released which affect other cells.

This is how viruses cause diseases.

One type of virus will affect one kind of cell, like a cold virus will infect the cells of the upper respiratory tract.

Viruses can be transmitted in a number of ways such as contact with an infected person, swallowing, inhalation or unsafe sex.

How Does Our Body Fight Back?

Our skin, mucous membrane form the first line of defense, when a virus enters our body the immune defenses are triggered and white blood cells(lymphocytes and monocytes) begin to attack and destroy the virus.

This general protection is referred to as innate or natural immunity.

There Are Different Types Of Viral Infections

Viruses can infect any part of our body the most common viral infections involve the respiratory tract.

The common cold– Commonly occurring viral infection-symptoms such as sneezing, stuffy nose, sore throat can last from two days to two weeks. Colds are highly contagious and spread by fluids from sneezing and coughing

Influenza is also known as the flu is a respiratory infection caused by virus. Symptoms include body chills, sore throat, fever, muscle ache and sore throat. Unlike cold flu can lead to serious illness and life-threatening situations.

Gastrointestinal system is also affected by viruses with symptoms like diarrhea and vomiting. Stomach viruses spread through contaminated food or water and can cause viral gastroenteritis meaning inflammation of the stomach and intestines. Symptoms include nausea with/without vomiting, low grade fever and abdominal pain.

Chicken pox and common warts are viral infections which affect the skin. Chicken pox is highly contagious spreads in children under 15 years of age.

Viruses such as Herpes are caused by herpes simplex virus(HSV) it can infect mouth, genitals and anus.

Usually the diagnosis is based on physical symptoms and the history of illness.For certain infection tests are conducted, tests like

The best treatment is a strong immune system if your immune system is strong no virus can affect your overall health and well- being and to help you in this quest Bagdara Farms have lovingly crafted Immunoturm.

What Is Immunoturm?
Immunoturm is 100% organic and carefully crafted under the purest of conditions to maintain the integrity of the product. It is high in Curcumin nature’s most powerful phytochemical with therapeutic properties.

It has been demonstrated that curcumin as a plant derivative has a wide range of antiviral activity against different viruses. Inosine monophosphate dehydrogenase (IMPDH) enzyme due to rate-limiting activity in the de novo synthesis of guanine nucleotides is suggested as a therapeutic target for antiviral and anticancer compounds. Among the 15 different polyphenols, curcumin through inhibitory activity against IMPDH effect in either noncompetitive or competitive manner is suggested as a potent antiviral compound via this process. The study of different bioconjugates of curcumin, namely, di-O-tryptophanylphenylalanine curcumin, di-O-decanoyl curcumin, di-O-pamitoyl curcumin, di-O-bis-(γ,γ)folyl curcumin, C4-ethyl-O-γ-folyl curcumin, and 4-O-ethyl-O-γ-folyl curcumin, against variety of viruses including parainfluenza virus type 3 (PIV-3), feline infectious peritonitis virus (FIPV), vesicular stomatitis virus (VSV), herpes simplex virus (HSV), flock house virus (FHV), and respiratory syncytial virus (RSV) assessed by MTT test showed the potent antiviral activity of curcumin and its bioconjugates against different viral pathogens for further studies. Also, di-O tryptophanylphenylalanine curcumin and di-O-decanoyl curcumin revealed remarkable antiviral activity against VSV and FIPV/FHV with EC50 values of 0.011 μM and 0.029 μM, respectively.

Immunoturm Can Be Taken As:

Bolster and strengthen your immune system with Immunoturm to get protection against all viruses.