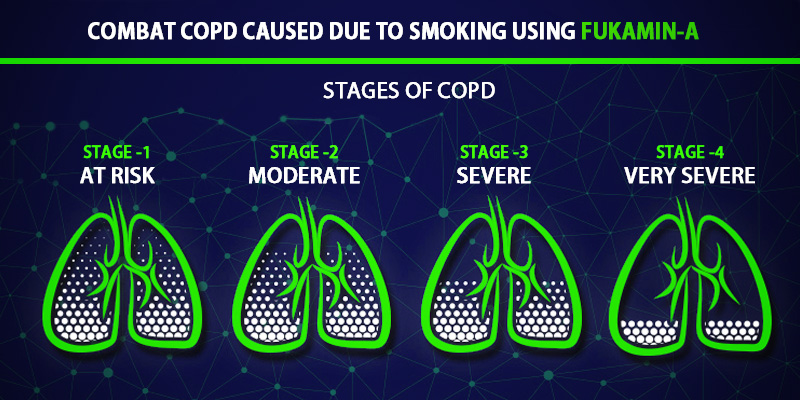 When you smoke, it really shows .Cigarette smoking is really harmful and they are a big addiction and can nearly kill you. Even if you are a passive smoker, you are at a high risk of developing diseases related to smoking and one among these is COPD.

Despite of increased awareness of the deleterious effect smoking can have on health, people still seem to indulge in smoking and COPD is one of its harmful consequences.

COPD or chronic obstructive pulmonary disease is a disease that affects the respiratory system. Cigarette smoking is the leading cause of COPD. Other lung irritants like smoke, chemical fumes and dust can also cause COPD. It damages the airways in your lungs and leads to shortness of breath, impacting your work, exercise, sleep and other everyday activities.

How To Judge If One Is Suffering From COPD Or Not????

Bronchitis: It is the inflammation of the airway that connects the lungs and nasal passage.

Emphysema: It is the damage of small air sacs present in the lung that help filter the air and absorb oxygen.

If you experience any of these symptoms, you might be at risk for COPD,

The single biggest cause of COPD is cigarette smoking. About 90 percent of people who have COPD are smokers or former smokers. Among smokers, 20 to 30 percent develop COPD. Many others develop lung conditions or have reduced lung function. Your risk of COPD is even greater if you have asthma. COPD isn’t contagious.

There’s no single test for COPD. Diagnosis is based on symptoms, a physical exam, and test results.

What Are The Stages Of COPD?

One measure of COPD disease is by stage. The stages are:

Stage 1 – At risk: Symptoms include coughing and noticeable mucus.

Stage 2 – Moderate: Symptoms are becoming more noticeable. You may start to experience shortness of breath.

Stage 3 – Severe: Symptoms become more frequent and you may have occasional flare-ups of severe symptoms.

Complications Due To COPD. COPD can cause many complications, including:

Treatment can ease symptoms, prevent complications, and generally slow disease progression. COPD is treatable. With proper management, most people with COPD can achieve good symptom control and quality of life, as well as reduced risk of other associated conditions.

The medicines and steroids in the line of treatment of COPD though are beneficial in reducing the symptoms and further complications but they do carry some serious side effects, which will adversely affect other organs of the body.

Bagdara Farms FUKAMIN-A is one of the best herbal and natural medicine for the treatment of COPD without any side effects . Fukamin – A has been specially farm grown in a pure natural environment, without any addition of fertilizers and pesticides .

Fukamin –A contains accurate amount of curcumin levels in it, which is known for its therapeutic properties and has strong antioxidant, anti-inflammatory and anti-cancer properties, which it utilizes to protect lungs from nicotine induced damage.

Few Of The Properties Of Fukamin –A

It attenuates oxidative stress- COPD is also characterized by oxidative stress, which is an imbalance between pro oxidants and natural antioxidants found in the body. Curcumin reduces oxidative stress in COPD and elevates the level of antioxidant enzymes.
It clears blockage of respiratory tract- Curcumin has the potential to being developed as nasal drops, which can clear congestion and blockage of respiratory tract.
It prevents progression of COPD into lung cancer- Curcumin reduces the risk of developing cancer in high risk COPD patients and is also effective in preventing infection.
To sum up, Fukamin -A shows great promise as an add-on therapy for COPD as it reduces inflammation, clears airway obstruction and prevents infection and progression to lung cancer.