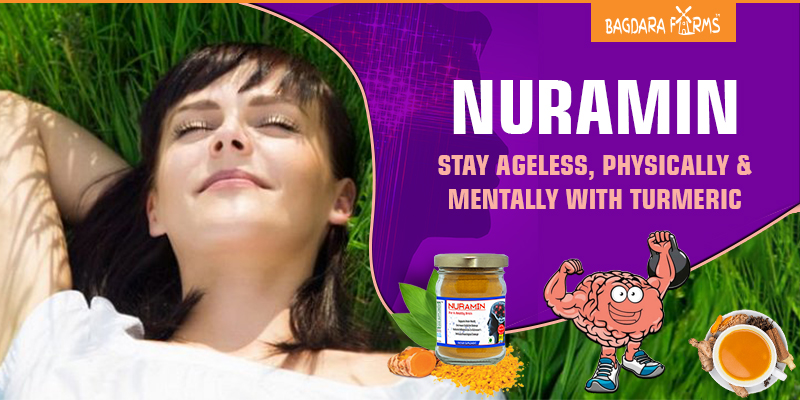 Everyone wants to be happy and healthy whatever their age is.

A combination of social, mental, and physical stimulation can be the best medicine for a healthy life. But not all of us are lucky to have it all. In India with augmented life expectancy and an ageing population, it is assessed that over 5.3 million people live with dementia of which Alzheimer’s is the most common cause.

Alzheimer’s is the most common type of dementia.

This progressive ailment begins with trivial memory loss leading to loss of the ability to carry on a conversation and respond to the environment. It can extremely affect a person’s ability to carry out day-to-day activities.

What Are The Causes?

Causes probably include a combination of age-related changes in the brain, along with genetic, environmental, and lifestyle factors.

Medicinal Turmeric is known to have anti-oxidant, anti-inflammatory, and cholesterol-lowering properties that are noteworthy to the pathogenesis of Alzheimer’s disease.

Neurologically, people suffering with Alzheimer’s disease are found to have inflammation in some regions of the brain due to highly insoluble amyloid beta deposits as well as neurofibrillary tangles.

Researchers have shown that peroxisome proliferator-activated receptor gamma (PPAR-γ) has been associated with anti-inflammatory effects in turmeric. It has been understood that curcumin found in medicinal turmeric hinders amyloid beta induced expression of Egr-1 DNA binding activity in THP-1 cells.

As a powerful immunomodulatory

Medicinal Turmeric can modify the activation of (1) T cells, (2) B cells, (3) macrophages, (4) neutrophils, (5) natural killer cells, (6) along with dendritic cells.

Dendritic cells are antigen-presenting cells that are involved in the origination of the adaptive immune system. Dendritic cells treated by the all-natural curcumin induce regulatory T cell development as well as the making of IL-10 which impedes inflammation. In the same way, neutrophils have been perceived to express an obvious decline in oxygen radical formation when treated with curcumin.

Natural killer cells, lymphocytes which eliminate tumours and infected cells, have been shown to upsurge antibody responses in people who include curcumin in their diet. Studies have revealed positive effects of curcumin making it an ideal effective immunomodulatory agent.

Medicinal turmeric, rich in curcumin, shields cells from damage sustained by free radicals within the intracellular environment. The super antioxidant properties of curcumin in medicinal turmeric prohibited oxidative damage instigated by lipid peroxidation products, which include carbonyl compounds such as hydroxynonenal. It is revealed  that the primary component of  medicinal turmeric, curcumin, not only illustrates antioxidant characteristics.

But that these qualities play a momentous role in limiting the amount of reactive oxygen species thereby hampering the pathogenesis of Alzheimer’s disease.

Alzheimer’s disease has been strongly associated with cellular oxidative damage. This results due to the accumulation of beta amyloid fragment of the amyloid precursor protein, which further results in the formation of plaques.

These plaques trigger an immune response that ultimately causes the characteristic inflammation observed in the brains of patients with Alzheimer’s disease.  Medicinal Turmeric abundant in curcumin, however, has been shown to prevent these proteins from assembling and crafting plaques by swelling the combat with low-density lipoproteins to oxidation.

Medicinal turmeric plays a significant role in lowering cholesterol as an important preventive impact on the development and progression of Alzheimer’s disease.

Everyone can improve their health, and adopting a healthy lifestyle is key to doing this.

It’s never too late to improve your health, and by establishing a healthy lifestyle now, you’ll continue to reap the rewards in the future, no matter how old you are.

You don’t have to make massive changes all in one go.

It is often better to gradually adapt your lifestyle implementing small changes every week so that in the long term you can reap the benefits of good health. With a little thought and commitment, you really can see dramatic improvements in both your lifestyle and health.

Medicinal turmeric has the capacity to change the outlook of human health in regard to the holistic approach. Inculcating more spices like turmeric into the human diet, can prevent many infectious diseases. However, it is important to know what supplement you are using and making sure that it is safe for consumption and not causing more harm than good.

Nuramin is a promising product from BAGDARA FARMS, which assures to take care of Alzheimer’s in the most natural way possible.  It is a boon for brain health, with all its neuro-protective and natural anti-depressant properties.

The best part is that it does all this without any side effects. But the choice is for you to make and to make sure that you incorporate the best medicinal turmeric in your diet.