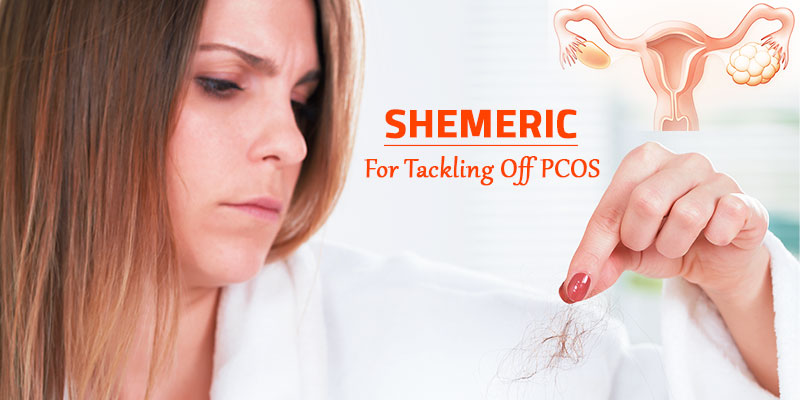 As we all know, hormones are the chemical messengers which play a critical role in the smooth running of our body. Change in even the smallest quantities of hormones can wreak havoc. Polycystic Ovarian Syndrome, commonly referred to as PCOS is one such disorder that arises due to a hormonal imbalance in women under the reproductive age bracket (15- 44 years). The function of male hormones is very different from that of the female hormones. Now in the case of PCOS, women have higher than normal levels of male hormones or androgens. Let’s read further to know how this happens.

Ovaries are the female gonads that produce the female gamete ovum every month by a process called ovulation. This ovum is fertilized by the sperm forms a single-celled structure called a zygote. These processes are not so simple as they sound. Luteinizing hormone and Follicle stimulating hormone control the process of ovulation. Along with these two hormones, ovaries also release progesterone and estrogen that regulate the menstrual cycle and also a minimal amount of male hormone called androgens. PCOS is a syndrome in which affects the ovaries and ovulation process.

So What Exactly Happens In PCOS?

There are many small, fluid-filled sacs that grow inside the ovaries due to which the syndrome also gets its name Polycystic means many cysts. All these sacs will contain the follicles each with an immature egg but the eggs never mature enough to cause ovulation. This lower rate of ovulation further reduces the levels of female hormones and increases the number of male hormones more than usual. The symptoms of PCOS may vary, but the three main features are:

Obesity increases the severity of the symptoms in PCOS.

What Could Be The Possible Causes Of PCOS?

If Left Unattended To, PCOS Can Have Severe Complications Like:

A pelvic examination, ultrasound, and blood tests are done by the physician to diagnose PCOS.

Bagdara Farms have made one of the simplest and effective ways of tackling PCOs in a product called Shemeric. It is enriched with curcumin and turmerone that play a massive role in hormonal balancing.

Buy Shemeric and get rid of PCOS naturally.

2 thoughts on “If You Are Suffering From PCOS, Your Solution Is Here..”