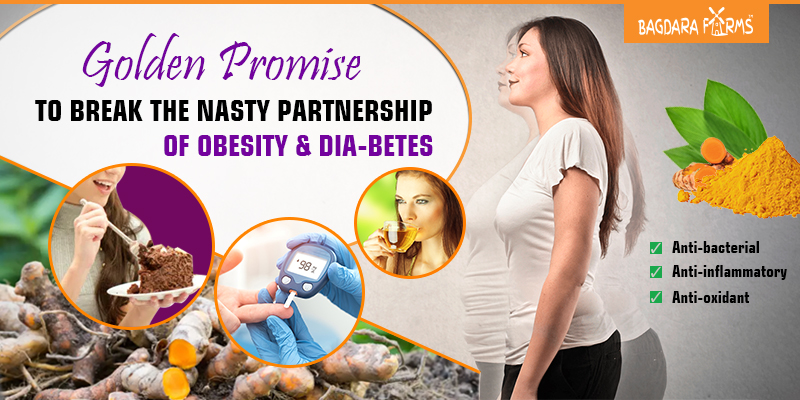 GOLDEN PROMISE TO BREAK THE NASTY PARTNERSHIP OF OBESITY AND DIABETES

Obesity is no longer a problem that just affects older people, although the probability does increase with age.

Obesity is one of the most predominant disorders of developed countries, and its incidence is swelling rapidly.

The occurrence of overweight and obesity in India has increased faster than the world average.

Can Obesity Cause Diabetes?

Diabetes mellitus and obesity have a complex relationship. There is a strong association of type 2 diabetes with obesity. Obesity is one of the major risk factors for type 2 diabetes.

Studies reveal that abdominal fat cells release ‘pro-inflammatory’ chemicals, which can make the body less sensitive to the insulin it yields by upsetting the function of insulin receptive cells and their capability to respond to insulin.

This is known as insulin resistance – the trademark of type 2 diabetes.

Curcumin in medicinal turmeric is significant in weight loss and an increase in lean tissue mass.

Medicinal turmeric with its therapeutic properties is responsible for the inhibition of key transcriptional proteins involved in adipogenesis, which explains the weight loss and the decrease in adipose tissue.

This mostly occurs in individuals who are involved in compulsive eating when they are belligerent with negative emotions. Research says medicinal turmeric affects the neurochemicals in the brain and it is just as effective as many prescription-based serotonin re-uptake inhibitors, but without any side effects.

There are numerous ways of taking turmeric to fight obesity. So it is best to choose a supplement that is in powder form, is natural and has no chemicals.  Medicinal Turmeric is recommended to be had early in the day empty stomach to show its best results.

So wake up make the right choice and walk on the path that nature paved for its most beautiful creation, The Human Body.