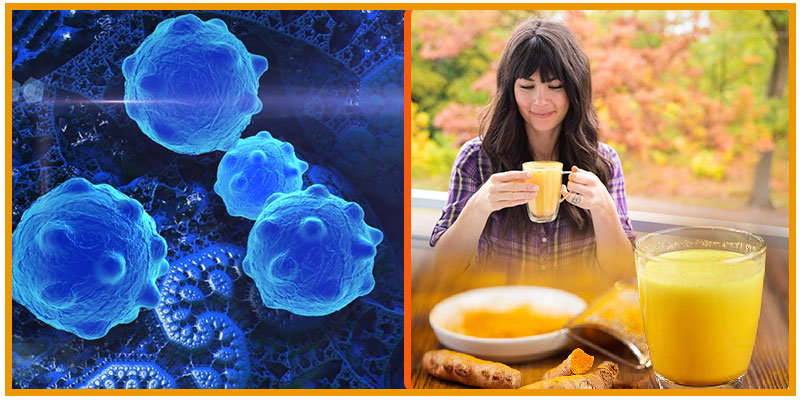 Cancer is one of the most dreaded yet, common diseases affecting people of all age groups off late. If the cancer is detected well on time, then the chances of getting cured are high. It also depends on the kind of cancer that one is afflicted with. One of the major reasons for the unsuccessful treatment of cancer is the development of resistance to chemotherapeutic drugs. Before we get into that, we must know what stem cells are.

Nature’s answer to this problem of cancer stem cell-associated drug resistance lies on a very simple ingredient. Curcumin from turmeric is a phenolic compound and is widely used as a spice to adding more flavor and a golden hue to dishes in many Asian countries. It is bestowed with many medicinal properties like anti-inflammatory, antioxidant, antiseptic and last but not the least, anti-cancer property. Concentrating mostly on the anticancer property of curcumin, it is believed that it has the ability to sensitize not one but multiple cancer cells to chemotherapy treatment especially the cancer stem cells.

An experiment was done pancreatic cancer cells to understand the efficacy of curcumin in killing cancer cells. In this process, the Pancreatic ductal adenocarcinoma cells (PDAC) which were resistant to gemcitabine, were first cultured. The end results were very positive in which it was seen that curcumin not only increased the sensitivity of cancer cells to gemcitabine but also inhibited the growth of cancer stem cells. Curcumin was able to do this by regulating the functioning of a class of non-coding RNA called ‘long non-coding RNAs (a type of non-coding RNAs which is unregulated in most of the cancer cells). Curcumin was also found to inhibit the expression of one of the most well known long non-coding RNA based oncogenes called EZH2.  Oncogenes are genes that drive cancer. EZH2 is a common oncogene which is involved in chemo-drug resistance. Moreover, since curcumin is a great anti-inflammatory agent it can prevent excess inflammation in the body which is also a major cause of dreadful diseases like cancer. Curcumin has antioxidant properties too which help in tackling the free radicals giving rise to oxidative stress. Oxidative stress, in turn, can be one of the root causes of cancer.

Thus, the study concluded that curcumin could be used as a supplement along with chemotherapy due to its non-toxic property and being cost effective. It is relatively safer and could prove to be a more potent alternative chemotherapeutic agent. This is the reason why regular consumption of curcumin is suggested to prevent cancer. It must be taken along with a pinch of curcumin in order to increase its absorption into the body.

Works on these Health Conditions:

24 People are looking at this product

The product is grown and processed organically by using the highest standards of manufacturing without having any harm on wildlife and keeping in view a softer look towards the Mother Nature.

Minimum Course - is for 2 months and consists of 3 units of the product to be consumed over 60 days.

Moderate Course - is for 4 months and consists of 6 units of the product to be consumed over 120 days.

Recommended Course - is for 6 months and consists of 9 units of the product to be consumed over 180 days.

Extended Course - is for 8 months and consists of 12 units of the product to be consumed over 240 days.

Oropharynim is a marvelous creation by Bagdara Farms, which is naturally enriched with the bio-active curcumin to forestall the growth and to prevent oral cancer. This humble produce of nature could help treat oral cancer. The abundant medicinal properties make Oropharynim; a therapeutic treatment for oral cancer that can be the best way to cure yourself, without causing any harm to other parts of your body. Oropharynim possesses a number of pharmacological properties, which gives it a clinical significance and also makes it the natural defense for oral cancer and an efficient weapon in controlling and terminating cancerous growth.

Please Note – It is advisable to start the dosage for all age limits in small quantity and then gradually increase it. It is also important to be cautious, not to give this product to children below the age of 2 years.