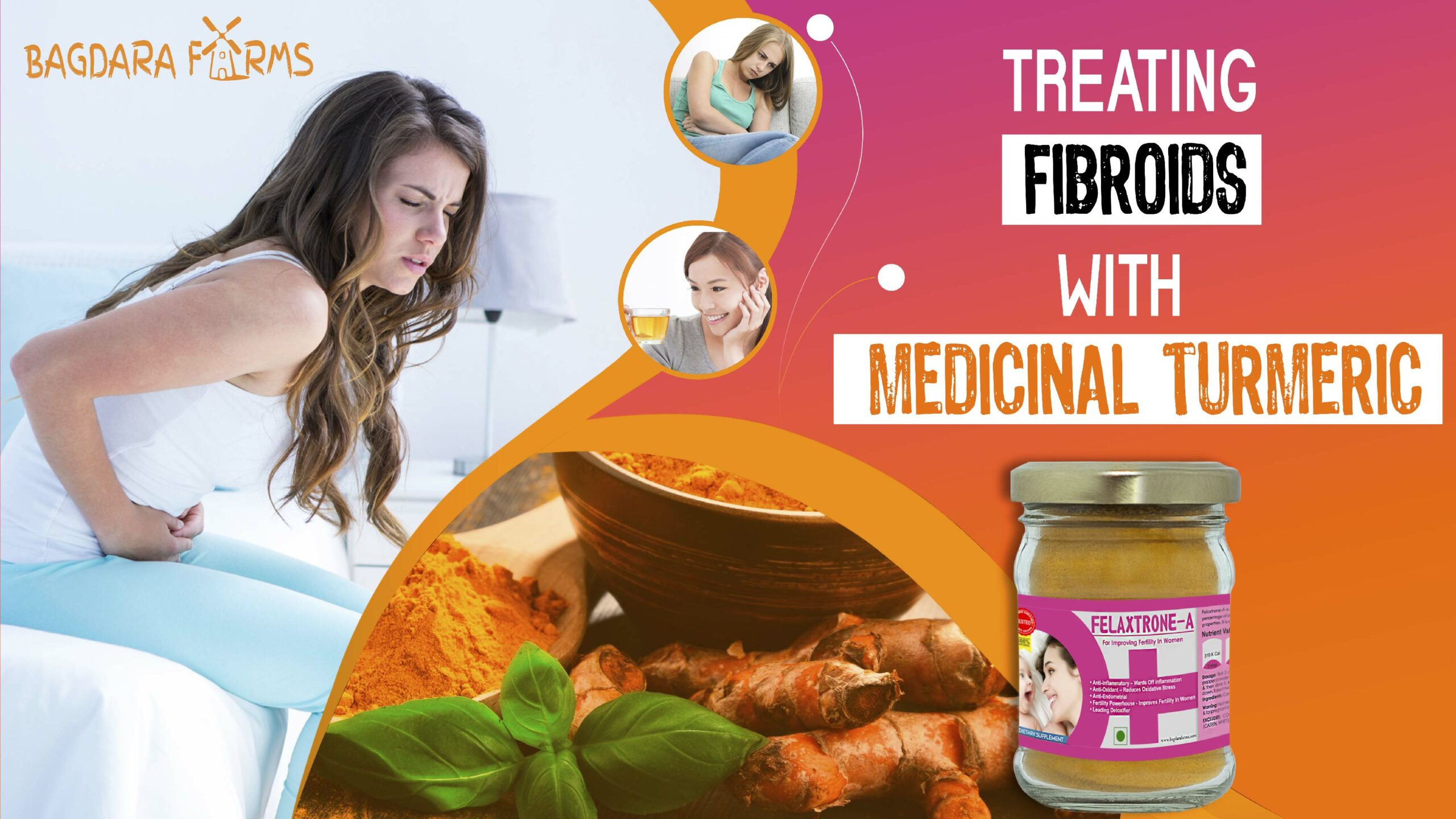 Women do live with fibroids without any problem, and maybe not even feel that they even have them.

But fibroids can grow speedily and cause lower pelvic pain, radiating into the groin or leg. Uterine fibroids are common benign muscle tumours of the uterus. It does affect the normal life of many women of childbearing age.

Uterine fibroids are the cause of major quality-of-life issues for approximately 25% of all women who suffer from clinically significant symptoms of uterine fibroid.

WHAT ARE UTERINE FIBROIDS?

An abnormal growth that develops either in or on a woman’s uterus is called fibroids.

Many times these tumours become quite bulky and cause stark abdominal pain and heavy periods. Most of the cases show no signs or symptoms at all. The growths are typically benign, or noncancerous.

The cause of fibroids is unknown.

Medicinal turmeric has been studied for its capacity to shrivel uterine fibroids, by binding to and stimulating PPAR-gamma and which because of this action, shrinks a fibroid tumour/growth.

The tumour suppression mechanisms of curcumin in medicinal turmeric are attributed by intonation of various targets playing significant roles in tumour growth.

Those targets include transcription factors

Curcumin from medicinal turmeric is a potent inhibitor of fibronectin in the uterine tissues.

It not only averts fibronectin secretion, but also poses as neoplastic agent by preventing the formation of new cells.

By binding to an unidentified cell surface binding site to activate the ERK1/2 flow. In addition, to down regulating NF-κB activation, curcumin hinders phorbol ester-induced activation of NF-κB and ERK1/2.

Curcumin deters TGF-β-induced ECM production. Curcumin has been known to control pro-apoptotic factors in these cells which then go through autophagy.

Curcumin a pure gift of nature provides a fresh ray of hope for uterine fibroid therapies.

Medicinal turmeric diminishes the number of inflammatory molecules circulating in the blood and protects the cells. Curcumin in medicinal turmeric helps in regulation of the inflammation in the uterine tissues by soothing them of any injury or infection, further paving way for condensed damage to the cells of the uterus and minimizes chances of occurrence of uterine fibroids

Medicinal turmeric is good for treating a number of ailments and fibroids is one of them.

Medicinal turmeric is sure to be a complementary or alternative medicine in treating fibroids. Curcumin can destroy fibrotic cells or stop them from reproducing naturally without causing any side effects, which is wonderful news for women.

Be mindful of picking up random turmeric supplements. Remember, it is the curcumin content that makes the product pharmacological and medicinal.

FELAXTRONE-A from Bagdara Farms is an organic product, which is curated especially keeping in mind the significance of women health.

FELAXTRONE-A is rich in anti-inflammatory properties, anti-oxidant components; it is a powerhouse in improving fertility, high in its curcumin content and a leading detoxifier. What else do you want when this organically rich product has so much to offer? Make the right choice and go for the best.