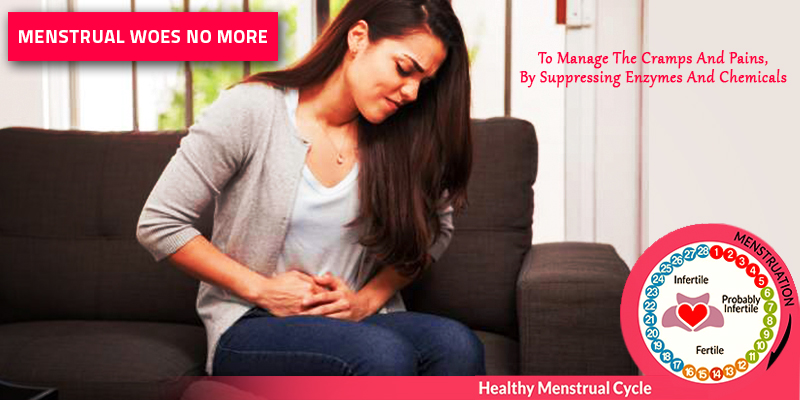 Every woman on this planet will vouch for the fact that while having a regular menstrual cycle is a sign of good health, it is still quite a pain to manage. In today’s world where women are competing with men shoulder to shoulder in all fields,pre-menstrual stress is a huge roadblock. Whether one likes it or not, every month brings along with it that one week during which, as a woman, you experience mood swings, abdominal cramps, nausea, fogginess, inability to focus and a general feeling of listlessness and exhaustion, just to name a few. The degree of intensity of these symptoms may vary from one woman to another. Blessed are those who can claim to be able to sail through their menstrual cycle. Most women I know, including myself, have always dreaded that time of the month simply because it hampers their ability to compete whole-heartedly in the race of life.

As I said earlier, despite all the above annoyances, a healthy menstrual cycle is coveted by women too as it is a pre-requisite for being able to get pregnant eventually and have a healthy baby. Women who have irregular periods or no periods at all worry a lot about their ability to conceive and deliver a baby. Such women also suffer from hormone imbalances which lead to other nasty side-effects like hirsutism, acne etc. All in all, menstruation is one of those necessary evils that one cannot do without.

Finding a remedy that not just regularizes the menstrual cycle but also alleviates the pain and malaise brought on by the monthly cycle is the key to every woman’s monthly woes. Mother Nature too is a woman, and it is almost as if she understands the plight of her sisters around the world. It is to reduce this plight that she created a natural remedy in the form of curcumin that has the potential of soothing menstruation related troubles. Curcumin is a natural phytochemical found in turmeric. It has been used by Ayurvedic medics for centuries to treat a variety of ailments owing to its fantastic therapeutic properties.

In the case of menstruation-related aches and pains, curcumin can be very beneficial in the following ways:

Shemeric is a curcumin-rich supplement created especially for women by the kind folks at Bagdara Farms. The curcumin used to develop Shemeric is grown locally at Bagdara using scientifically designed organic farming methods. The soil at Bagdara is exceptionally fertile and optimum for increasing high-quality curcumin as the farmland is located in the heart of the verdant Bandhavgarh forests. As a result, the curcumin produce at Bagdara is pure, organic and safe for consumption. Its organic cultivation methods help in ensuring that no harmful chemicals find their way into the product thus making it unadulterated. Shemeric is a must-try for all women around the world. Regular consumption of this miracle supplement will attenuate your monthly woes to a considerable degree!