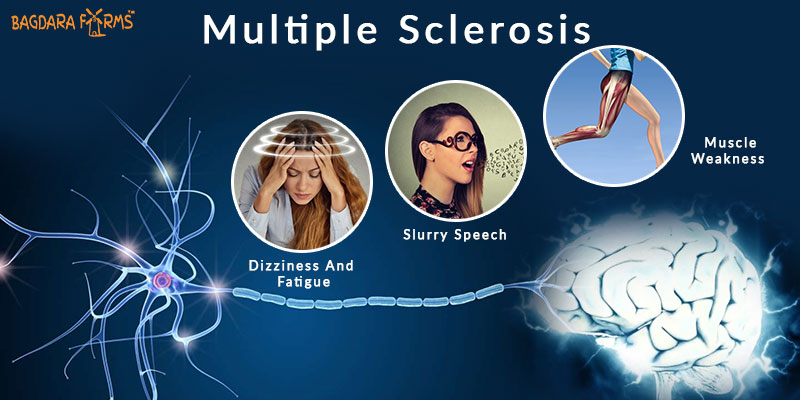 Nerve cells of neurons are the special cells of the nervous system which help to pass on the messages from one part of the body to the other.  The covering of neurons is called the myelin sheath which covers the nerve fibres and helps in communicating between the brain and the rest of the body. Multiple sclerosis is a disabling disease of the brain that damages these nerves beyond repair. It affects the brain, spinal cord, and optic nerves of the eyes leading to problems with muscle control, balance, vision, and many other basic functions.

The symptoms of MS or multiple sclerosis can vary from person to person and also the location of the affected nerves.

Some Common Symptoms of Multiple Sclerosis Include:

Many years of research says that multiple sclerosis is an autoimmune condition in which the cells of the immune system start attacking the fatty material of myelin on the neurons. Once these outer coverings of the nerve cells are damaged, the nerve fibres also get damaged forming scar tissues. There are many risk factors associated with multiple sclerosis-like genetic mutation and excessive smoking.

Some of the tests that are done for the correct diagnosis of MS are blood tests,  MRI scans, analysis of the cerebrospinal fluid, and evoked potentials to check the electrical activities in the brain.

Curcumin can be a blessing in disguise in preventing and treating multiple sclerosis owing to its antioxidant and anti-inflammatory properties. Nuramin from Bagdara Farms helps in the prevention and cure of multiple sclerosis as it is made of pure curcumin direct from their farms.