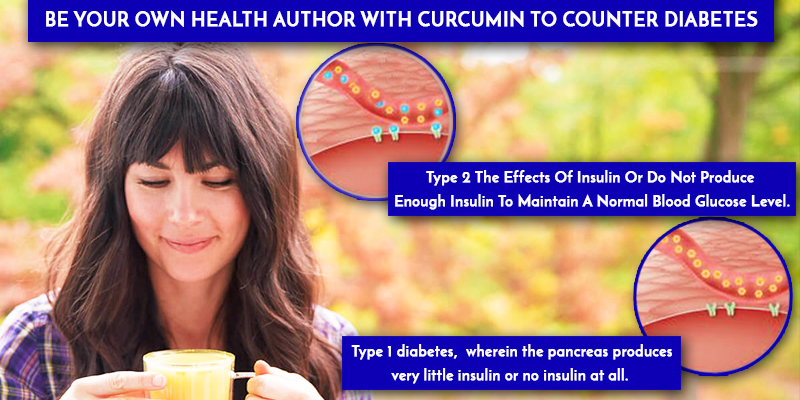 BE YOUR OWN HEALTH AUTHOR WITH CURCUMIN TO COUNTER DIABETES

According to the Williams textbook of endocrinology, it was estimated that in the year 2013, there were over 382 million people throughout the world suffering from diabetes. We have all heard of diabetes in our daily lives as a very common term but it’s difficult to fathom the effects this condition can have on a human body.
Diabetes is the name given to a number of diseases that involve abnormal metabolism of sugar due to the erratic functioning of the hormone insulin. A small organ behind the stomach called pancreas is responsible for the production of insulin and assist with the balanced storage and usage of sugar as well as fat from the food.

Radha Shukla, a 35 year old housewife was diagnosed with Type 1 diabetes, which is a chronic condition wherein the pancreas produces very little insulin or no insulin at all. It is also called insulin-dependent diabetes. It generally develops when the immune system of the body destroys the insulin-producing beta cells in a part of the pancreas called the Islets of Langerhans.

Jeet Chopra is a successful software engineer who has been suffering from Type 2 diabetes for the past two years. For years his routine included sitting in front of his laptop with more or less no exercise. Unpredictable work schedules and party scenes added with consumption of all wrong foods played havoc with his body resulting in non-insulin dependent diabetes. The dual causes of this type of diabetes are either the body resists the effects of insulin or do not produce enough insulin to maintain a normal blood glucose level.

The common symptoms of all the types of diabetes are almost the same and are as follows:

With such complex symptoms, this disorder has no cure. A diabetic individual needs to modify his lifestyle in order to keep the disease under check. According to the ancient Ayurveda and Chinese medicine, curcumin and turmerone have been proved to be beneficial in curbing the effects of diabetes by:

Now that curcumin and turmerone have such great benefits, isn’t it better that one gets to use their purest form. That assurance and guarantee is given by using Sugeric from Bagdara Farms. All one needs to do is boil a cup of water with ¼ tsp of Sugeric, honey and ¼ tsp of black pepper and voila, the magical yellow potion is ready. It is recommended that one starts off with small quantities gradually increasing the dosage with time.

Interesting reads to support what we are saying: